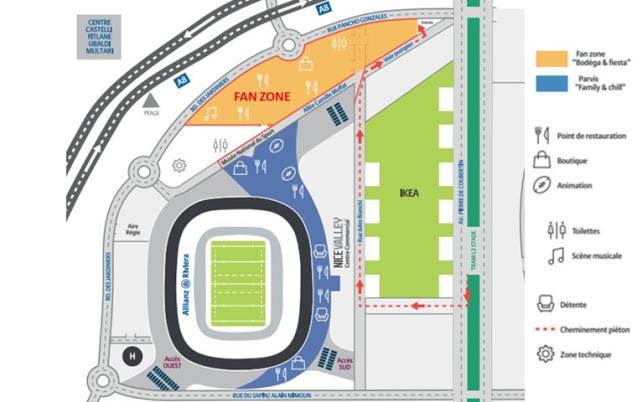 share
send by email print
For the 2022 TOP 14 semi-finals, the French National Rugby League has gone all out to make the Allianz Riviera Fan Zone unforgettable! A brand new concept, “Festival TOP 14”, is being launched to offer the 72,000 fans a fun-filled, exhuberant experience throughout the weekend. Open from 5 to 8:30 pm, then from 10:30 pm to 12:30 am, this Fan Zone will host a festival-worthy musical line-up, fun and fan-friendly activities as well as a downtime and family area.

5 – 6:30 pm: L’Apero des Frenchy. A party-ambiance concept with a 100% French repertory. This local group formed in 2019 has already earned a reputation for whipping up a feel-good ambiance; the perfect opening for the ‘Festival TOP 14’.
6:30 – 7:30 pm: Brotherockers. A group of four exceptional musicians trained at the Nice Conservatory who cover a sweeping repertory of the ‘classics’ from the 1950s to present day. No better way to warm up for the match.
7:30 – 8:30 pm: Boom Brass. An electro Brass Band that plays medleys of the best pop-electro songs of recent years, with a marching band twist.
22:30 pm – 12:30 am: L’Apero des Frenchy will be back on stage to close the loop.


Fun in the Fan Zone:

A bowling area equipped with two pétanque courts (no French Riviera party is complete without one!)
A “get in the scrum” photo booth for a souvenir photo of yourself in the middle of a scrum.
A make-up stand to show team pride wherever you go.
A game area for learning how to play Pilou Niçois, a local game of skill for the whole family.
A “score a try” photo booth sponsored by Intermarché
A relaxation zone with rest areas
Fans of the two semi-finalist teams will want to head for their own bodega, decked in the colours of their favourite club, to gather with fellow fans bearing flags, pennants, banners and playlists.


Inside the stadium, activations for entertainment on and off the field

Don’t miss the pre-match playlist by DJ Cut Killer. The famous French DJ Cut Killer has prepared an exclusive 20-minute playlist that pumps out one hit after another to get fans singing and dancing to fire up the stadium 30 minutes before kick-off.


and that’s not all…

Tiktok streaming from the TOP 14! Pauline Bouic, telephone in hand, will go live at the event, taking her followers behind the scenes and interviewing the public. This live TikTok video will be backed by a major amplification campaign, a first for a sports event.