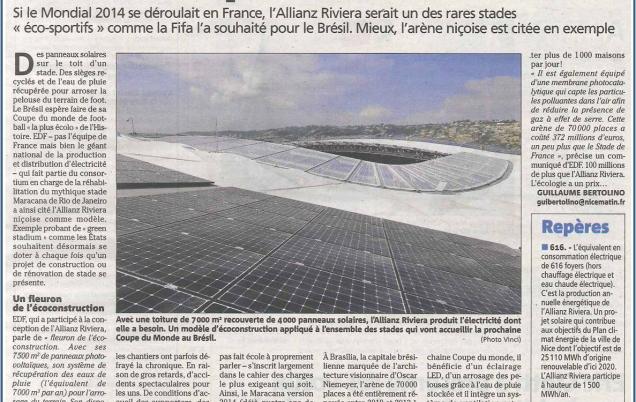 This Monday, Nice-Matin devoted a page to "eco-sports" stadiums participating in the 2014 World Cup, and Allianz Riviera was held up as an example for its "sustainable development" approach.

Allianz Riviera was entirely designed to use as many renewable natural resources as possible, making it the first positive-energy stadium to host matches in the UEFA Euro tournament 2016.

Allianz Riviera is the world's first stadium to have a wooden slat structure of this size. This innovative construction combining wood and metal ensures savings of 3,000 tons of carbon during its production as compared to a traditional structure.

Allianz Riviera is the first stadium to be fitted with a natural ventilation system which channels the wind from the Plain of the Var, cooling and ventilating the stadium naturally. The technique is inspired by the way the Romans built arenas which allowed for natural circulation of the air within the venue and channeling of the wind on a large scale. Innovation which helps to reduce energy requirements by three.

Allianz Riviera is the first stadium to benefit from such a large photovoltaic surface area. Thanks to its solar panels, photovoltaic production covers its energy requirements. This photovoltaic power plant consists of over 4,000 solar panels (surface area of approx. 7,000 sq. metres) manufactured in Europe. They were incorporated into the roof's waterproof membrance with an exclusive solution developed by EDF ENR (AlkerSolar). This large-scale solar project forms part of the Town of Nice's "Plan Climat Energie", aiming for 25,110 MWh of renewable origin by the year 2020. The Allianz Riviera stadium will participate to the tune of 1,500 MWh per year.

Allianz Riviera is a leading stadium in terms of energy self-sufficiency thanks to geothermal power for the facility itself and the eco-neighbourhood. It draws its resources (heating and cooling) from the water table in the Plain of the Var. WATER

Allianz Riviera is the first stadium to be self-sufficient in terms of watering of the pitch. The stadium's roof recovers rainwater stored in 4 collection tanks in the foundations at car-park level.